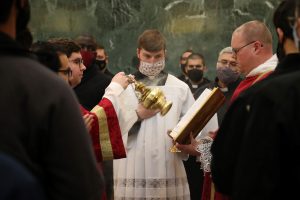 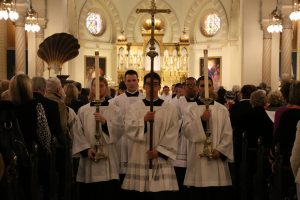 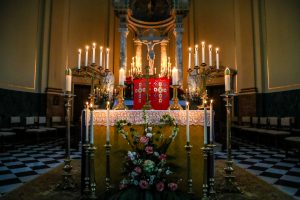 Liturgical formation is an essential part of preparing men for the priesthood. It is probably the most clearly visible reflection of a man’s time in seminary when he enters parish ministry. Here at Notre Dame Seminary, men are formed to participate, celebrate, and preside over the Eucharistic Celebration, the other Sacraments, and other liturgical celebrations of the Roman Rite. Formation in the Extraordinary Form of the Roman Rite is also available for those dioceses and orders that require it for their seminarians. Seminarians spend time in each role in the Mass, including participant among the lay faithful, schola and choir, lector, acolyte, and deacon. To offer the broadest possible exposure to the Mass as it will be needed in parish life, Masses in the Ordinary Form are regularly celebrated in English, Latin, and Spanish; the community even participates in a Vietnamese Mass each year. Outside of the Mass, the seminary community regularly prays the Liturgy of the Hours, participates in Eucharistic Adoration and Benediction, and several private devotions including the Rosary and Divine Mercy Chaplet.

On this page, we want to give an insight to liturgical formation at Notre Dame Seminary.

A Rehearsal with the NDS Schola 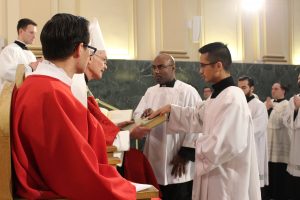 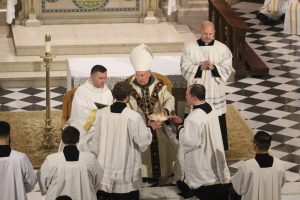 During a man’s second year of theology, he is instituted to the ministry of acolyte. Acolytes assist the priest and deacon at the altar during the celebration of the Mass. They are also given the privilege of purifying the sacred vessels used for Mass, and they are generally the first Extraordinary Ministers of Holy Communion when those are necessary. 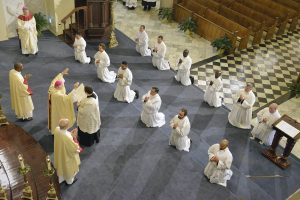 Generally, between his third and fourth year of theology, a man destined for priesthood at Notre Dame Seminary will be ordained to the transitional diaconate. As a deacon, a man is charged to proclaim and preach the Gospel, assist the priest in the celebration of the Mass, preside at Liturgy of the Hours, Benediction, and other liturgies, and especially, ordained and configured to Christ the Servant, serve his fellow Christians. In his diaconate ordination, a man takes on the clerical obligations of obedience to his bishop, priestly celibacy, and praying the full Divine Office or Liturgy of the Hours.

Notre Dame seminarians spend their first several months as deacons on an extended internship in their home dioceses fully immersed in the liturgical life and active ministry in the Particular Church they will serve.